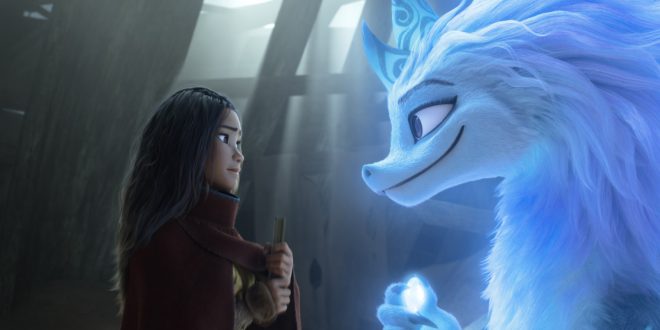 Raya seeks the help of the legendary dragon, Sisu. Seeing what’s become of Kumandra, Sisu commits to helping Raya fulfill her mission in reuniting the lands. Featuring Kelly Marie Tran as the voice of Raya and Awkwafina as the voice of Sisu, Walt Disney Animation Studios’ “Raya and the Last Dragon” will be in theaters and on Disney+ with Premier Access on March 5, 2021. © 2021 Disney. All Rights Reserved.

Raya and the Last Dragon Emphasizes Trust and Community

Walt Disney Animation Studios’ “Raya and the Last Dragon” is an epic journey to the fantasy world of Kumandra. Raya embarks alone on her quest to find the last dragon to restore the fractured lands and its divided people. In her pursuit, she learns that it takes more than a dragon to save the world— it takes trust, teamwork, friendship, and the wisdom of her community as well.

The theme of teamwork on screen mirrored Walt Disney Animation Studios’ real-life challenges. Due to the COVID crisis, the film’s more than 450 artists and technologists worked from home. Thanks to the advancement of technology, they completed the film physically apart, but virtually together.

The film’s themes of trusting one another and working together are relatable to all audiences. “Right now, the world is very broken,” said Co-screenwriter Qui Nguyen. “This movie has a lot of magic in it, but I think the biggest piece of magic is trust. It is the real secret ingredient that will save our fictional world of Kumandra. And it’s a message that I think is really important for the world to have and see.”

Walt Disney Animation Studios’ “Raya and the Last Dragon” is available on Disney+ with Premier Access and in theaters.