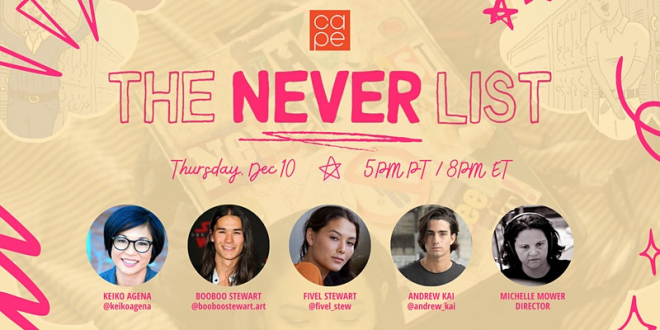 Join CAPE for a conversation with the cast and director of THE NEVER LIST, an upcoming indie film directed by Michelle Mower and starring Fivel Stewart, BooBoo Stewart, Keiko Agena, and Andrew Kai. Panel will be moderated by Michael Tow.

After the sudden death of her best friend, a straight-laced teen sets out to fulfill the secret list of outrageous acts the two of them said they’d never do.

FIVEL STEWART (Eva Jeffries) is the breakout star of the Netflix series Atypical. She is best known for her roles in Hansel and Gretel: Warriors of Witchcraft, Freeze and Pit Fighter as well as for her leading role in the pilot for Freeform’s Close Up. Later in 2020 she will begin filming the new Sam Raimi-produced supernatural horror Pic Umma, which stars Sandra Oh and Dermot Mulroney.

BOOBOO STEWART (Lead Singer) is an actor, singer and visual artist. He is known for playing Seth Clearwater in The Twilight Saga, Warpath in X- Men: Days of Future Past, and Jay in the Disney television film franchise Descendants. He also appears in American Satan as Vic Lakota.

KEIKO AGENA (Jennifer Jeffries) is currently a series regular on the FOX show Prodigal Son where she plays Dr. Edrisa Tanaka. Prior to Prodigal Son she was best known for the TV show Gilmore Girls, where she played Lane Kim for seven years and reprised the role in Netflix’s Gilmore Girls: Seasons. In between, Agena has been a series regular on HULU’s The First and a recurring On Better Call Saul, Dirty John and 13 Reasons Why. As a guest star she has appeared on such shows as Shameless, Scandal and NCIS Los Angeles to name a few. Keiko has recently published an Artist Workbook titled NO MISTAKES through Penguin/Random house which is available wherever books are sold.