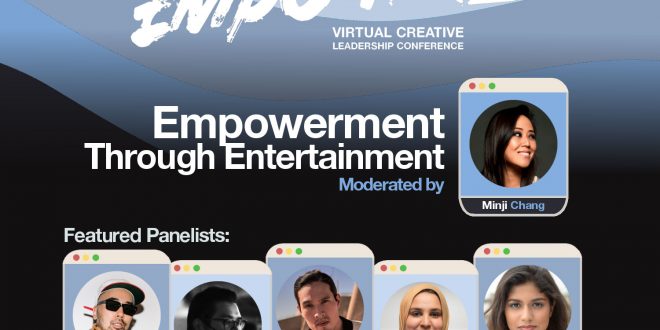 Kollaboration, a nonprofit supporting diversity and AAPI representation in entertainment, will once again hold its conference, where aspiring Asian Americans in arts, entertainment and new media can learn from the community’s inspiring professionals. Taking place on May 22, “EMPOWERD 2021” will be a free virtual event consisting of notable artists, actors, writers, directors, community leaders and more gathering virtually to educate Asian-American creative professionals. In addition to the lineup of speakers, the conference will also feature special guest appearances by award-winning journalist Lisa Ling and In the Heights director Jon M. Chu, a previous speaker at the EMPOWER conference.

“I moved to the US because I knew that the wave for Asian creatives in the diaspora was starting to crest. And Kollaboration was already a name in my head as a wee actor moving out cold from Australia,” says Chiam.

“They’ve been working from the beginning to bring visibility to the Asian American experience, and continue to do so as our wave rushes towards the shore. Don’t miss out on EMPOWERD, and all the associated momentum of Asian creatives coming together in this time!”

The virtual conference features three panels and guest performances by G Yamazawa, Milck and Sung Beats that will be streaming on Youtube and Facebook. Attendance will be free.

The AAPI has faced a significant rise in hate crime and racism during the past year, and community figures such as Michelle Sugihara, the Executive Director of CAPE, a nonprofit that advocates AAPIs in the entertainment industry, believe the conference will bring a positive impact.

“There is a direct correlation between dehumanizing portrayals of Asian Pacific Islanders in media and the violence being inflicted upon us in real life, which makes media representation a social justice issue,” says Sugihara.

“Conferences like EMPOWERd are critical to educate and inspire the next generation of Asian American Pacific Islander creatives to rewrite our narrative future.”

The EMPOWERD 2021 Conference was made possible through sponsorships from Sony Pictures Entertainment, Hulu, Comcast NBCUniversal, Warner Bros. and Nielsen.

For more information about programming and registration, please visit empower.kollaboration.org